TechPoint set them on tech career paths: How you can follow

For much of the last decade, the talent programs organized by TechPoint have worked to strengthen the state’s talent pipelines, helping the best and brightest find their way to exciting careers in Indiana’s  growing tech ecosystem. These programs include Xtern and the Summer Opportunities for Students ( S.O.S.) Challenge (now known at The Pitch), both of which help college students gain invaluable experience; and Sales Bootcamp, which works to get recent graduates and career-switchers into high growth tech sales roles.

We talked with five Hoosier tech professionals and alumni of TechPoint’s talent programs to gauge if—and how—those programs helped them along their professional pathways. We also asked them what advice they might have for those who are considering stepping along that same tech trail.

Indianapolis native Lauren Alayza’s journey into the world of tech sales took her through the professional worlds of music, grassroots organizing and advocacy, local politics and podcasting before she eventually realized the common thread: she enjoys helping people achieve their goals and get the most bang for their buck.

This passion led Alayza to spend several months in 2019 trying to find a way into the world of tech. TechPoint’s Sales Bootcamp opened the door.

“TechPoint literally changed my life,” said Alayza. “I was opened up to the software sales industry and given the opportunity to participate in learning-by-doing to see if what I wanted was a career in sales.”

By the time her four weeks in Sales Bootcamp was drawing to a close, Alayza was already receiving job offers and amazing opportunities.

After spending two years at her first tech sales job out of Sales Bootcamp, growing from Technical Sales Representative to Business Development Manager, Alayza moved to High Alpha startup Casted where she works as a sales development representative.

Her advice for anyone considering a tech career? “Tech is so broad it covers just about every kind of company. If you like problem solving, and searching and finding solutions to things you know nothing about, working in tech may be a good fit for you,” she said.

No tech experience? Go out and get some!

Applying for jobs is a daunting task, one made more difficult when facing repeated rejections. Josh Wolske was tired of making it to the final round interviews for roles in the world of SaaS, only to be turned down for not having quite enough experience. The Columbus, Indiana, native and graduate of the University of Southern Indiana decided part of his solution to this issue would be to focus on networking in central Indiana.

After spending some time at events hosted by the Young Professionals of Central Indiana (YPCI), Josh started hearing about TechPoint and the talent programs it offered, including a program that helped train people for tech sales roles.

“I applied [to Sales Bootcamp] a few times and finally got in! It was four weeks long; the first week being sales training and then the next three weeks we were at different SaaS companies for a week each doing sales.” said Wolske. “Being in Sales Bootcamp and doing those mini internships gave me the confidence to know that I can actually do this sales thing. Not only do I know that I can do sales well, but I also know that I have the ability to sell other types of software too. Having that experience did wonders for me.”

Wolske landed a job after his Sales Bootcamp training but it came just as the COVID-19 pandemic hit, and his position was short-lived. He persevered and found a position as an Account Development Representative at Terminus.

Wolske’s advice for someone who wants a tech career but doesn’t have tech experience? “Get it.”

“If you’re in an interview at a SaaS company and they say ‘you don’t have any tech or SaaS experience’, find a way to get that experience – whether it’s a program that TechPoint has, like Sales Bootcamp,” said Wolske. “Go and find a way to get that experience, so next time when someone tells you that, you can say “Actually, you’re wrong. Look at all this cool stuff I’ve done.’ If they still give you push back and say no, that’s their loss. I am so glad some of the people I interviewed with told me ‘no’ because I’m so happy where I am now.”

How to keep your edge in tech? “Never stop learning.”

The close of the 2019-2020 school year saw thousands of students across the country facing canceled internships, rescinded job offers, and other widespread loss of opportunities to learn, grow, and develop as professionals. Around this time Sean Wolfe was finishing his junior year at Ball State University, looking for a productive way to spend his summer.

At the same time the TechPoint team was creating the S.O.S. Challenge to help those pandemic-displaced interns. The 2020 S.O.S. Challenge put 500 college students together on teams of business and tech-skilled individuals. They were tasked with coming up with technical solutions to issues facing different areas of our community and economy due to COVID-19.

“In the [S.O.S. Challenge], I had a chance to work with other students and utilize my software development skills on a real world problem,” said Wolfe. “The S.O.S. Challenge had an exponential effect on my professional path. I lacked many basic resume, interviewing, and networking skills. I was a hard worker and knowledgeable, but did not know how to showcase it to employers. Because of the S.O.S. Challenge, I was able to become a well rounded candidate when applying for jobs.”

Following his time in the S.O.S. Challenge, Wolfe finished his undergraduate studies in winter 2020 and took on a position with UKG through its Winter 2021 Elevate class, with a full-time offer as a Solutions Consultant. He later moved to the Analytics team.

“After learning about the growth in the tech industry Indianapolis had, I felt that it would be a great place to start my career,” said Wolfe. “Indianapolis’s tech community is large enough that there are so many opportunities out there to choose from. But it is also small enough such that you are able to make great connections with people who only want to see you succeed.”

Wolfe’s advice for anyone considering a tech career? Keep growing your skills. “Tech is a fast paced and growing industry that is always looking for ways to push the envelope,” he said. “One of the best ways to stand out is to show that you have interest in learning new things and are willing to change with the technology itself.”

“You don’t have to be on the Geek Squad, but everyone needs tech at this point.”

TechPoint’s Xtern program is nearly  a decade old. It has helped more than 1,100 college students secure summer internships with more than 140 tech employers across Central Indiana and showed them why central Indiana is an amazing place to live, work, and play. Marc Jones found his way into Xtern after he secured a summer internship and his employer-to-be gave him the option to join Xtern.

Jones initially joined the program in summer 2016 because of the free housing it provides in Indianapolis, but what he found in Xtern was much, much more. “[I] met with incredible community, professional development, and service opportunities,” he said. “My experience was so impactful that the subsequent summer I turned down an internship offer from a large pharmaceutical company in favor of joining the Xtern program again.”

His two summers in the Xtern program helped Jones see all that Indianapolis has to offer, and is one of the primary reasons he still calls Indianapolis home today.

“I learned in my first Xtern experience that software development was not my calling. I landed in Business Analytics for my second Xtern internship and subsequent full-time work,” said Jones. “I think it’s fair to say that Xtern steered me away from a personally dissatisfactory career towards an area of high impact and reward.”

After his experiences with the Xtern program Jones joined Eli Lilly and Company, working in business analyst, project management, and portfolio management roles in its clinical and preclinical product spaces.

“Technology is transforming every area of our world, and TechPoint’s programs have continued to evolve to reflect that,” Jones said. “If you’re interested in shaping communities and organizations with technology, TechPoint is a great partner to have on that journey. Their people and programs are incredibly strong, so it’s hard to imagine a better space to be in tech.”

His advice for people considering tech as the next move in their professional journey? “Get tech skills.”

“Everyone needs tech at this point, so adding a savviness to your tool belt can open up a whole host of opportunities,” said Jones. “Post-graduation I’ve seen a lot of transformation and upskilling directed towards tech in the pharmaceuticals I work with, and as new talent you have a unique position to highlight the latest and greatest you’ve picked up in academia. Don’t worry about being a Geek Squad member if IT doesn’t light your fire, but integrating technology into what you are passionate about can be a huge asset.”

“If you want to be a part of something much greater than yourself, you’ll want a tech career.”

Chelsie Christian was among Xtern’s inaugural Class of 2014, helping lay the foundation for what the program would become. As a student at Indiana University-Bloomington, Chelsie received an email from the TechPoint team via IU’s Career Development Center promising “the best summer of her life.”

“Two internships and a full-time job offer later, I was excited to be enriched by this city’s leaders and celebrate females as well as to be a female in the tech industry,” Christian said. “I was exposed to many initiatives to serve the community during my time with the program, and that has changed my perspective in many ways to want to look for how I can help outside of my small bubble.”

Christian said the wide variety of professional, social, and civic opportunities Xtern provided her the opportunity to shape her support to extend her professional pursuits. “You will be amazed if you stay open-minded and open-hearted at the potential you will find in Indianapolis, your peers and their many talents, your host company, and yourself,” she said.

Since her time in the Xtern program Christian has worked with SEP, receiving two significant promotions leading to her current role as senior interaction designer. She is also a co-organizer of a local chapter of the global Interaction Design Association (IxDA) in Indianapolis.

Why was tech the best fit for Christian? “Beyond job security, this field continues to break down walls, integrates many talents and people, and is at the front-lines of cutting edge solutions for improving lives in the world. If you want to be a part of something much greater than yourself, you’ll want this.” 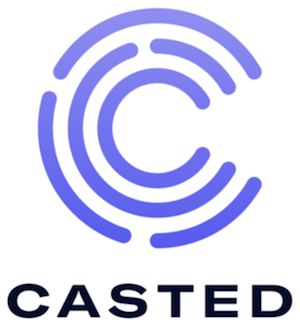 Indianapolis, IN
Casted is a marketing platform for branded podcasts and the marketers who run them.
See Profile

Indianapolis, IN
Lilly is a global health care leader that unites caring with discovery to make life better for people around the world.
See Profile